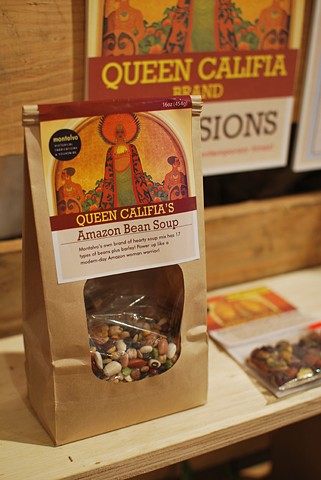 Calafia was a warrior queen who ruled over a kingdom of black women living on the Island of California. She was a pagan who raised an army of women warriors and sailed from California with a large flock of trained griffons to join Muslims in a battle against Christians defending Constantinople. In the siege, the griffons harm enemy and friendly forces. They were soon withdrawn. Calafia and her ally Radiaro fought in single combat against the Christian leaders, a king and his son the knight Esplandián. Calafia was bested and taken prisoner- she later converted to Christianity. Eventually, she married a cousin of Esplandián and returned with her army to California.

(Queen Calafia was a character in the novel entitled Las sergas de Esplandián (The Adventures of Esplandián), written by Garci Rodríguez de Montalvo around 1500.)